THE HOUSE ALONE WITH THE SEA - John Wawrzonek

ALONG THE MASSACHUSETTS SHORE north of Boston those who love the sea have been building homes for hundreds of years, sometimes only a few dozen feet from the water or on a low cliff near the water. Having grown up in Rhode Island I came to love our visits to friends who owned these homes.

This may be, for the most part over. Two parts of global warming contribute to the problem of the shoreline receding year after year, homes disappearing into the ocean or being moved inland. A single problem, warmer water, causes higher sea levels, but even more so, much stronger storms.

IN THE MID-1950S we experienced direct hits from several hurricanes. The strongest, hurricane Carol in 1954, had top winds of about 120 miles per hour and the eye of the storm passed directly over us. We lost many tree branches and one tree (of many). Nevertheless for a 13 year old, a category 3 storm was frieghtening, especially when my father and I had to move heavy cables, supporting our tall spruce trees during the storm as the winds shifted direction. A far worse storm, the hurricane of 1938 was a bit of a legend in the family. I did not expect that this was a foretaste of what was to come many years later. This was a category 4 or 5 storm and it creates far more damage than category 3 since it is capable of ripping homes and wooden buildings apart. 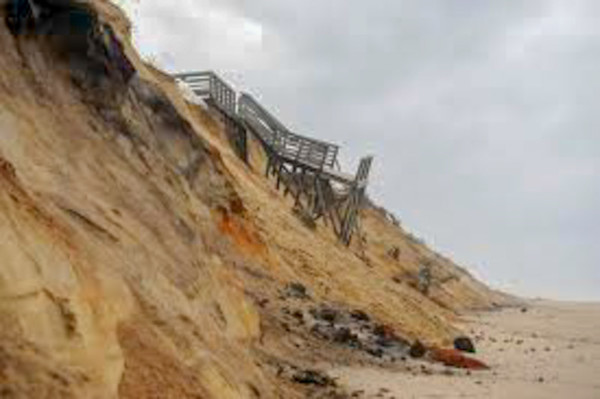