INTRODUCTION TO THE CLIMATE - John Wawrzonek

Introduction to the Climate

Climate Is A Bit Confusing.

One of the best explanations is from NASA. Click on NASA CLIMATE AND WEATHER.

Basically it is a question of time. Average temperature (or rainfall, or snowfall, etc.) over say 50 years. Weather is what is happening right now or over a whole winter. If 6 months of winter change every year (which they do) it has little or no effect on the climate.

Here is the most often seen measure of temperature over the last few decades. The trend is unmistakable.

Here is what the media is not telling you. Just one example.

We make a different graph. We go back to 1880 and let the software Excel make a prediction based on the last 140 years, combined with my prediction. At the end of the century the OPTIMISTIC temperature is up 3.9°C. My best guess is 5.3°C. It will give us "hot as hell" summers.

But that is not the end by a long shot. When the temperature passes roughly 2.0°C there is nothing we can do. It will just keep getting warmer and warmer. There will be no winters. Migration would begin north and many people would die. And the sea could rise as much as 100 feet and flood all the coastal cities.

If we could get the fake president out of the way, we could make the world cut its emissions fast. But more than that we could actually CLEAN the air, that is REMOVE carbon dioxide. Its called negative emissions. It is controversial. It would be extremely expensive but we could stop worrying about climate change. We would have a real green new deal and we could work to build a better life for everyone. But you know what? It would be like World War II. High taxes, high employement, high prosperity and a clean atmosphere. But with a president who thinks he understands science, when he is wrong about everything, we are (excuse the language) screwed. So we are stuck until the election and we had better elect some climate fighters. That is the scoop. 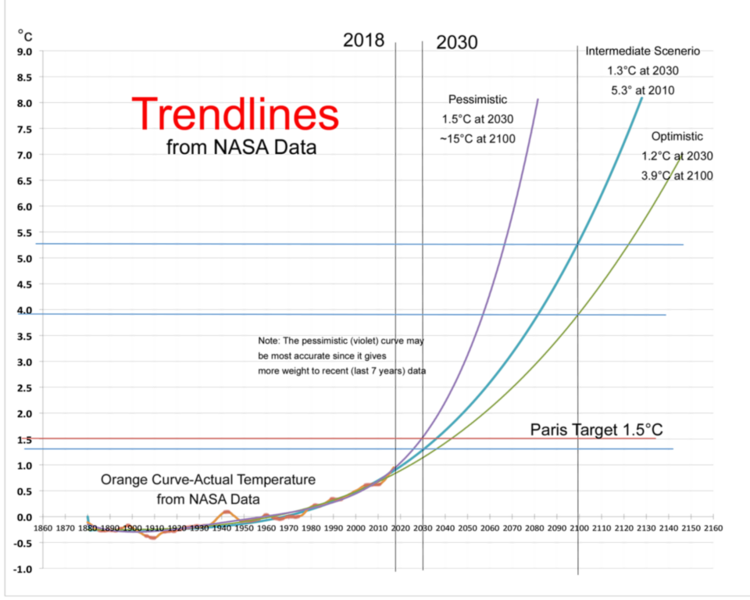