A STEP BACK A DIFFERENT KIND OF DANGER - John Wawrzonek

A DIFFERENT KIND OF DANGER

THIS WEBSITE BEGAN with an feeling on my part of a disconnect between virtually everyone,BNBBBBNgh there was something even deeper, as if we were looking into a swimming pool, seeing all the ripples and reflections but not quite getting a georgeous mosiec on the bottom. And we were not trying. I have concluded that everything is at stake or soon will be.

THEN I TOOK A STEP BACK. It seems to me that contrary to a spoken and unspoken assumption, we are not an advanced civilization whose technology and democratic institutons will save us. There are too many irrational parts of virtually all parts of society world wide, with religion pulling in one direction very strongly and physics pulling strongly but only here and there.

The crushing of truth and democracy, the illuminating idea of "fake news" or what we used to call "spin" or lying seemed to have spread into almost every corner of thinking. We believed what we wanted to believe and that was the end of the story. And when once upon a time there were discussions now there were only arguments.

WHEN EVERYTHING WAS TAKEN INTO ACCOUNTwe were a mismash of philosophies, religions, carryovers from earlier varities of our species, carryovers from earlier societies such as hunter-gatherers and we could not see this. Technology had outrun everything else. The huge part of the population no longer hunting and gathering was running away with the world. This most pivital moment since the beginning of history and this mixture of ideas, attitudes, habits, and blindness, etc. was not well suited to solving the climate problem.

Partly there was the critical issue of the degree of scientific literacy among the population as a whole, but perhaps more importantly among those in the media: reporters, news editors, news anchors, popular writers, etc. Included in this was not just scientific literacy, but the depth of the literacy. This extended all the way from young people who had taken one general science course to PhDs and ScDs in science whose perspective was too narrow. A PhD in physics without knowledge of philosophy, the fine arts and psychology was too narrow to lead, unless the requirements of the leadership were narrow also.

Taken together these were fatal flaws.

WE THOUGHT THAT BECOMING ACCOMPLISHED at the various skills that made us what we are was sufficient, that we had had made it and that gradually incremental improvements would tie up the loose ends and lead to world-wide nervana. However, as was almost certain any such idea was premature.

To add to the problems, leadership world-wide was moving in irrational directions, particularly away from liberal democracy which had been presumed to be the ideal. This in turn was leading to greater separations between countries and societies just at the time we needed to be coming together.

And although I had found myself attempting to deal with a wider and wider range of issues, this was in a way a singularity all its own, and a deeper rethinking was necessary that would encompass global warming but attempt to put it in a larger context.

An interesting look at our attitudes was Francis Fukuyama's The End of History that suggested that the fall of the Soviet Empire meant that liberal democracy had won, and that eventually all nations would adopt this political system. Needless to say the book was controversial. It is ironic that I write this on July 17, 2018 one day after the infamous meeting between Donald Trump and Vladimir Putin that shook American foundations even further. The response to this has not played out and, for that matter, may not play out for a very long time should the planet survive long enough. A very unfortunate development of this meeting was an agreement to foster a renaissiance in fossil fuels. To Trump's uncomprehending mind, warming was hoax. To Putin it was an economic necessity. There was no sign of "good for all mankind" whatsoever in either of their attitudes.


HOWEVER, CLIMATE CHANGE WAS STILL THE DRIVING FORCE for because of the helplessness of our civilization it would proceed unimpeded and both the temperature of the Earth and the challenges to civilization were on the verge of an exponential explosion. Indeed, if one were to do the simplest projection possible, a trend line extrapolation of NASA temperature data from 1860 to 2017, a jolt appeared that I had not anticipated. This extrapolation is reproduced below. There has been some discussion that temperature increase could be exponential and that this would be catastrophic. I am certain that others had done this extrapolation, although perhaps not on this data. The extrapolation covered a fairly long period and the data was "noisy" with the effect of volcanoes and other anomilies interferring. However with appropriate smoothing the overall data suggests the beginning of a polynominal expansion, presuming you acccept Microsofts algorhythyms. However, it is interesting that prior to looking at Excel's calculation I had done a bit of curve fitting and my curve landed in between the 2nd and 3rd order polynominals.

Already there are many signs the climate is running away from our efforts and it will not take much more rise in temperature before the temperature curve really does become exponential. This is our ONLY home and, especially in the United States, we are not devoting attenton to its problems on a large enough scale and instead following policies that would permantently and seriously damage the earth so that it will not support nearly its present popuation, and concievably could become uninhabitable.

I believe that for the first time in modern history and possibly all human history that a strategy for solving the problem is not evident. There is no one thing to do more of or build more of that will do the job given the breakdown of American democracy, the wide ignorance of basic science and the lulling effect that too much of the world is at present escaping the worst effects of warming. In addition there are aspects of human psychology that suggest this attitude might be expected. I discuss these later.

THERE IS, OF COURSE ONE STRATEGY that appears at this point like a long shot, and that is to vote out of office every member of every goverment that is not fully supportive of what must be done, and to vote in every climate activist possible. This is a very long shot. 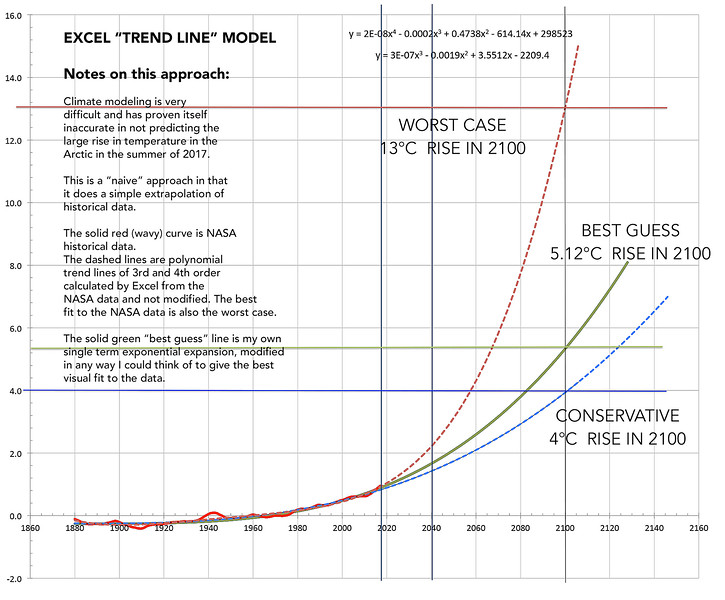